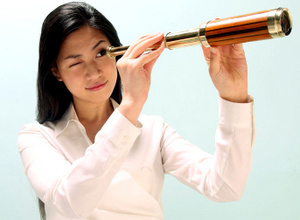 China's stocks and economy move as if they exiisted in separate universes.  Photo: kuku

ANYONE HOPING TO predict benchmark indices based on the local economy are often left scratching their heads in frustration.

Stock markets in the US and Europe have been surging of late even as their economies remain mired in very slow growth or outright recession.

In short, bourses in all three regions seem to have little skill as barometers of relative economic vibrancy within their local markets.

And there is no shortage of market watchers who often both observe and perhaps sometimes even complain that there is no indication that the current bear market in China is any indication of future economic trends in the country.

Nor can on-the-ground economic conditions serve as a reliable litmus test for determining directionality for shares in Shanghai and Shenzhen.

One prominent analyst even suggested that Beijing would serve the country and markets well by opening up its billfold and establishing a large-scale fund to help stabilize share price volatility and shore up valuations on the upside.

And following a very bearish 2012 to date and an especially downbeat September, the jumping-in point for both retail and institutional investors is well nigh, and timing for the proposed “stabilization fund” is also optimal, given the new nadirs being hit on a regular basis.

The US economy is struggling to get back in a groove, with recent GDP growth stuck between anemic annual rates of 1.5% to 2%.

However, the Nasdaq, Dow Jones and S&P 500 Indices have had banner years so far.

At the same time, China’s economy has consistently produced economic growth rates of over 7% -- a GDP increase that other developed nations would sell the family silver to achieve.

The good news is that China’s bear market can’t endure much longer without attracting a flood of positive attention from bargain hunters at home and abroad.

When China’s economy overtook Japan a short while ago, the global investment community began clamoring for enhanced access to the PRC’s high-flying capital markets.

The danger in the lack of parallel behavior between China’s economy and its stock markets is this: foreign investors will shy away from the slumping A-share markets and assume that the bearish bourse behavior is a reflection of the country’s economic future and potential.

The above-mentioned market watcher said that a good place to start might be with China’s financial institutions.

Many A-share listed lenders were currently languishing below NAV, and there were several opportunities to get a foothold in China’s capital markets via its bargain-priced banks.

But he did add that property stocks were a higher risk due to ongoing speculation and the ever-present worry that the bubble might burst.

We have 1062 guests and no members online