Click on the above 36-second Youtube video for glimpses of the interview held at Jim Rogers' home in Singapore yesterday.


ON Dec 15, famed billionaire investor Jim Rogers will start on a 2-day journey that will take him by air from Singapore to Balikpapan in Kalimantan, and then by car and propeller plane to a coal mine concession.

This mine belongs to Geo Energy Resources, which listed in October 2012 on the Singapore Exchange and which Jim, it has just been announced, joined as a non-executive director yesterday (Dec 3). 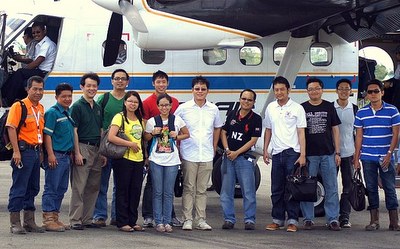 In April, ready to board a propeller plane in Kalimantan to fly out to Geo Energy's coal mine were analysts, Geo Energy independent directors and staff, Financial PR consultants and NextInsight.

Geo Energy is the first Singapore-listed company that he sits on the board of, and is one of only a handful of companies anywhere he has assumed such a role.

Asked how he came to be appointed to the board of Geo Energy, he told the media in an interview at his home yesterday that he was introduced to the executive chairman, Charles Antonny Melati, by Robert Lim, MD of Ellis Botsworth Advisory, the IPO consultant of Geo Energy. 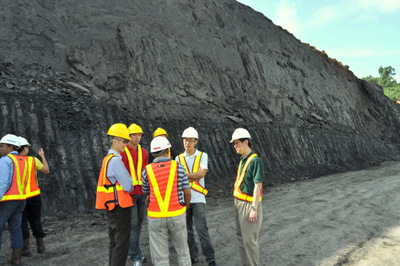 A fascinating sight of a long wall of coal at Geo Energy's mine. Photo by Leong Chan Teik

"I sat with them 3-4 X and talked to other people in the financial community. I did some homework and here I am."

He said his homework would continue with his trip to Kalimantan, his first to a coal mine in Indonesia.

Recognising the possibility that the visit would spark talk in the market, he had asked that his appointment to the board be announced prior to the trip.

Jim is famous for his long-standing bullishness about the prospects of commodities and natural resources, and he yesterday reiterated that he doesn't buy the commonly-touted reasons to shy away from investing in coal assets -- such as falling coal prices and the lack of developed mining infrastructure in Indonesia.

"We are inesting in a new country, a new venture. This is not investing in a fully developed coal mine in West Virginia in the US. That's how you find opportunity and get rich - if we get it right."

But China's economy has also slowed down, so demand for coal has gone down too....

"Yes, and you are supposed to buy low and sell high. Markets fluctuate, and I'm not in this for the short-term," said Jim, 70.

He has not invested in Geo Energy yet but "I will have a financial interest in the company."

Details of his potential investment have yet to be finalised.

When there are many growing substitutes (such as natural gas, wind energy) for coal, why invest in coal?

And Geo Energy? It's all in the IPO prospectus, he said, adding that the company has reserves to be developed and the prospect of further reserves and acquisitions of reserves.

"But I don't want you to think that just because I am involved, it's right. I hasten to tell you that I have made many mistakes in the past."

Certainly, his positive stand is in marked contrast to DMG & Partners' recent 'sell' call on the stock and a price target of S$0.34. (Click here for the analyst report which cites risks such as Geo Energy currently having only one coal mine operation.)

What value will Jim bring to the company? "All I have are my brains, or lack of brains. I hope I can bring some expertise to the venture," he replied adding with a chuckle: "I am not a good miner, I have never worked in a coal mine."

"I was asked to be a director and I thought it would be worth my time and energy."

Charles Antonny Melati, Executive Chairman of Geo Energy, said in a press release: “This appointment is evidence of the confidence placed in the Group. Moving forward, we are pleased to be able to tap on the vast experience and knowledge that Jim will bring on board to continue the progression of the Group, allowing us to push forward to greater heights.

"On behalf of the Group, I would like to warmly welcome Mr Jim Rogers as an esteemed member of our Board.”

Click on the 74-second slideshow below for further glimpses of the interview with Jim Rogers.

We have 1211 guests and no members online