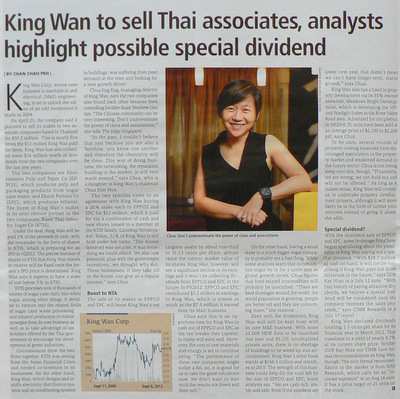 The Edge Singapore's excellent article in the current issue.

HIGH-DIVIDEND YIELD stocks are sought after in these times of market uncertainty -- so we highlight here King Wan Corp, which is the subject of an article in the current issue of The Edge Singapore.

King Wan's core business is mechanical & electrical engineering, and has a market cap of S$69 million (based on its recent stock price of 19.8 cents).

King Wan has a running dividend yield of 7.6%, which in itself is juicy enough.

The sweetener is the prospect of it paying a special dividend.

UOB Kay Hian in a July 12 note said: "With $28.7 million of cash on hand, it will not be surprising if King Wan pays out more dividends in the future."

Subsequent to that note, King Wan's financial statement (1QFY13 results) on Aug 10 stated that its cash level had gone up to $36.4 million. It has borrowings of $4.1 million.

CIMB Research in a July 17 note said: "With a history of paying attractive dividends, we believe a special dividend will be considered once the company receives the sales proceeds." 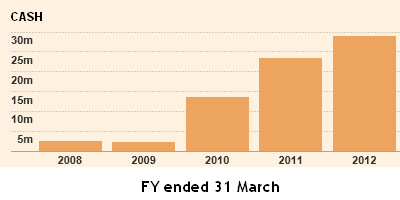 The possibility of a special dividend stems from King Wan's disposal of its stakes in two associates in Thailand for $50.2 million.

The buyer is Kaset Thai Industry Sugar, which will pay 5% in cash and 95% in its shares. KTIS is seeking a listing on the Stock Exchange of Thailand.

The disposals were approved by King Wan shareholders at an EGM on 23 June 2012.

While its cash will pile up, King Wan will face a significant fall in earnings contribution from its associates EPPCO and EPC.

In FY2012, the 2 associates contributed $7.2 million in earings to King Wan, which is almost as much as the $7.3 million it earned on its M&E business, noted The Edge article.

King Wan's MD, Chua Eng Eng, had this to say: "We are cash rich, stable and safe. Even if the numbers are lower next year, that doesn't mean we can't have long-term, stable growth."

For details of reporter Chan Chao Peh's interesting interview with Ms Chua, go buy a copy of The Edge from the newsstands at $3.80.

We have 2702 guests and no members online