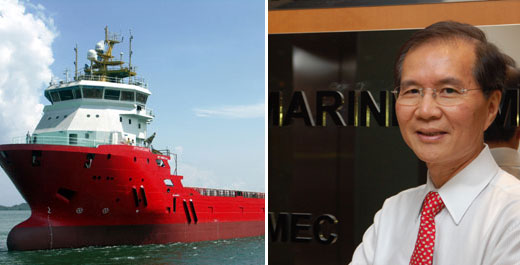 Otto Marine CEO Lee Kok Wah says: "We went into the seismic sector at its valley. Demand for seismic vessels is the front runner for the oil & gas exploration and production sector. It is the first to collapse, and the first to recover. Today's sustained oil prices augurs a recovery in the entire sector."

A shipyard may go the extra mile to help its customers retain their vessel, as Yangzijiang Shipbuilding has done.

In the case of Otto Marine, it has a competitive edge by operating in a niche market for vessels of design and specifications that are sought after.

”Besides building our own fleet, we also have a strong fleet management and marketing team. In the event of an order cancellation, we are ready to operate our own vessels,” said CEO Lee Kok Wah during an interview recently with NextInsight.

On Wednesday, the yard said it sold a platform supply vessel (PSV) and chartered out another that it had been contracted to build for its joint venture with Norwegian fleet operator GC Reiber, now terminated.

The second PSV was a bonus for Otto: GC Reiber had relinquished the PSV in exchange for a refund of its 51% share of the deposit for the marine engineering contract.

As for the other vessel, it was sold at 24.1 million euros (US$33.9 million), which was more than the value it had been contracted for by the Norwegian company.

The PSVs were two of four vessels from a 2008 contract under its 49:51 joint venture, Polar Marine, with GC Reiber.

With the joint venture’s termination, Otto took control over Polar Marine’s two PSVs and a remotely operated vessel (ROV) to be delivered next June. The second ROV was taken over by GC Reiber.


So was Otto one-time lucky, or can vessel cancellations be positively managed?

Another vessel cancellation it faced is related to four anchor handling tug supply vessels (AHTS) contracted in 2007 by another Norwegian offshore vessel operator, Mosvold Supply, for about US$320 million.

"The cancelled vessel had been contracted at US$77.5 million but based on external valuers' reports, all the four vessels now command market values better than in the Mosvold contract," said Mr Lee.

While a cancellation means Otto has to disgorge US$23.2 million in refund guarantee for the vessel, Mr Lee views this turn of events as positive: the yard will have 100% control over the vessel at a time when charter rates are as lucrative as when the contract was inked.

On 18 May 2010, Mosvold had canceled the shipbuilding contract for the first of these vessels due to delays, and this matter had gone into arbitration.

"We feel that the delay suffered by the vessel that was cancelled was not wholly our fault; various parties contributed to the delay," said Mr Lee.

The market became rife with speculation on the financial impact on Otto when Mosvold subsequently said in a statement in Aug that it was likely to cancel a second vessel.

The second AHTS vessel was due for delivery on 30 Jun 2010, and Mosvold said it expects to exercise its right of cancellation as it believes the delivery will be delayed beyond the refund trigger date in Dec 2010.

Even though contracted in 2007 during the shipbuilding boom, vessel prices are better now because only a few manufacturers in the world are able to make equipment for such sophisticated offshore vessels. The engines are specially made, as are the winches, explained Mr Lee.

Such offshore vessels are different from cargo vessels as the former is niche while the latter are like commodities.

In the last 2 months, there had been many more vessel transactions and charter deals in the offshore supply vessel market compared to 2009, which was a very difficult year.

Indeed, vessel prices and charter rates have improved. During the first half of 2009, a new 5150-bhp AHTS went for less than US$10 million.

The same is worth about US$13 million today.

As for the ROV vessel that Otto is building with a June 2011 delivery date, potential buyers are already enquiring about it, and Mr Lee expects it to be sold at an attractive price.

We have 295 guests and 4 members online