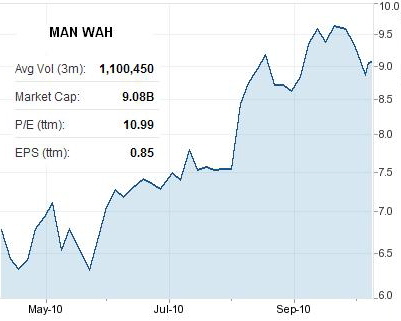 Man Wah re-listed in HK in April this year.
IN 2007, there was Want Want Holdings, a food and beverage group which delisted from the Singapore bourse, and relisted in Hong Kong.

It is now trading at a trailing PE of about 36.6 there, compared with 10 to 15 times in Singapore.

In recent times, there was Man Wah Holdings, which delisted from Singapore last year and re-listed in HK this year – and has had enjoyed a jump in its valuation to a PE of 11x.

Its new valuation in a HK initial public offering comes to at least HK19.4 billion (or about S$3.8 billion) based on the low end of the HK$3.88-HK$4.60 per share offer price.

That values the shares at 2011 price to earnings multiple of 22.5 times to 26.7 times, according to Reuters. 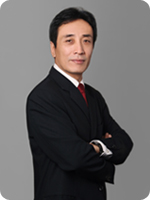 Dr. Che Fengsheng - Chairman and CEO of Sihuan Pharmaceutical
Sihuan is selling 1.25 billion new shares, or 25 percent of its enlarged share capital, to raise up to US$741 million by, according to Reuters.

Sihuan will kick off a formal marketing roadshow on Oct 12 and is set for a trading debut on Oct 28.

Investor appetite for Chinese medical stocks has grown as Beijing promises to create a national healthcare safety net and as the sector's relative immunity to economic cycles offers shelter in times of turmoil.

The company markets its products through a network covering about 10,000 hospitals and medical institutions across China.

While they are not delisting to go elsewhere, a number of Singapore-listed companies are headed for dual listings in HK or Taiwan, including:

We have 990 guests and no members online