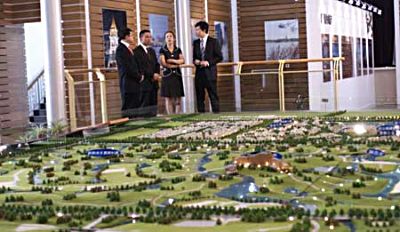 China New Town has 3 projects: Luodian project in Shanghai, Wuxi project and Shenyang project.
CHINA NEW TOWN DEVELOPMENT is just 10 days or so from being dual-listed on the Stock Exchange of Hong Kong.

“The Company is currently targeting a listing of the Shares by way of introduction on or about 22 October,” it said last night.

It added the usual caveat that the proposed listing is subject to, among others, the approval of the SEHK and relevant authorities.

The market appears to expect that the listing will materialize. Since Sept 21, which is about three weeks ago, the stock price has surged 48%, from 11.5 cents to 17 cents yesterday.

This despite a loss-making second quarter to the tune of RMB83.15 million, as announced on Aug 13.

China New Town’s operational results are mainly driven by the frequency and achieved selling prices of public auction of land use rights. 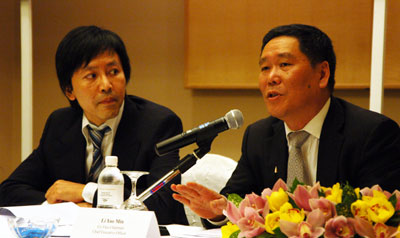 Beyond the quarter to quarter fluctuation in its financial results, the value of China New Town lies in its land bank which it has acquired and prepared for auction and subsequent development.

China New Town is directly engaged in the urbanization process by building new towns in the suburbs of major economic centers. This is in line with the central government’s urbanization strategy, and China New Town is not the target of recent regulatory tightening in the property sector to rein in property prices.

In all of its new town development projects, the company has always been helping the relocated locals with housing, social welfare and employment opportunities.

3Q10 numbers based on company's guidance as announced to the SGX.
Sterling 3Q results to come?

As noted earlier, the financial results of China New Town hinge largely on whether it has land parcels available for public listing.

The 3Q results will have lots of revenue coming in, because on 4 August 2010, the company handed over the F1-4 and F1-6 from its Luodian Project for public listing.

The land parcels were sold at RMB 522.5million and RMB1,377.3 million respectively, which is equivalent to RMB20,948 per square metres in terms of gross floor area.

This represents an increase of 129% from the last achieved price of RMB9,128 per square metres in Sept 2009.

China New Town has said that the land sale is expected to contribute revenue of approximately RMB1.1 billion and gross profit of RMB770 million to its 3Q results.

We have 604 guests and no members online