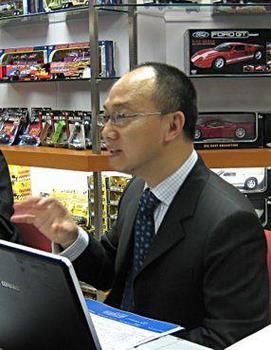 Apollo, which listed in October, was fully acquired by RBI Holdings Ltd last month and believes that this -- along with their pricing strategy -- makes them the best choice for solar module makers looking to minimize costs.

NextInsight: Please tell us more about your company, especially what distinguishes it from your competitors?

Apollo: We were established in 2008, so we are a bit new to the field. We spun off from parent firm GS Solar due to tremendous demand for thin-film turnkey solutions, and then were acquired by RBI Holdings Holdings last month.

We are based in Chuangzhou in Guangdong province (China) We make the equipment and turnkey solutions for producers of thin film modules in the solar power sector, and we have since begun large scale production of this equipment, having originally been engaged in the solar lamp business. So our group has been doing related operations for some 20 years so we do have quite a bit of history.

NextInsight: Why is Apollo a good place for investors to park their funds?

Apollo: We feel that this is definitely a good time to be in the sector in China, in large part due to active government support and assistance. Solar power has been designated as a strategic energy goal here, and heavy-polluting coal-fired plants in China are increasingly confronted with capacity increase restrictions.

I would say that one of our biggest competitive advantages as a company from a technical aspect is that our products are easy to service and easy to maintain and clean. But overall, our biggest selling point is that we are the world’s biggest thin-film solar module equipment maker, and produce the lowest price equipment.

Additionally, we have a very quick delivery time, averaging around half that of our competitors. We believe that solar energy will become an increasingly commonplace and utilized form of renewable energy, but it is still limited by higher set-up costs than other forms of power. For example, coal-fired power plants average around 0.3 yuan per kilowatt-hour, wind power is at 0.45 yuan, gas/oil at 0.65 yuan and solar around 0.85. However, with our expected advances in thin-film modules, we anticipate we can get this down to around 0.65 by raising efficiency to 10% by 2010-2011.

NextInsight: What else might some of the technically-savvy potential investors and fund managers out there be keen to know about your production facilities and quality control measures?

Apollo: Our products can help provide the lowest cost solar power in the world, at just 0.75 usd per watt for thin-film modules, and our PECVD (plasma-enhanced chemical vapor deposition: process used to deposit thin films on a substrate) capacity is also tops globally at 57 square meters. We also have very high yields, averaging over 93% under mass production conditions.

NextInsight: Specifically, what is Beijing doing, or planning to do, to promote the solar power in China and how encouraging is it for Apollo?

Apollo: President Hu Jintao has declared that the country should rely on renewable energy for 15% of total domestic needs by the year 2020. Wind and hydropower are expected to enjoy much smaller increases than solar by comparison over the same period, and nuclear power is even less favored at this point.

Therefore, we believe solar thin-film is the answer, and we see it as one of the highest-potential investment opportunities within the renewable energy sector, and in the world today.

As for China, the potential for growth is spectacular. Solar currently only provides for 0.145 Gigawatts in China, so we see it growing by over 100,000% over the next decade. According to Sinolink Securities, solar energy in China should increase an average of 8 GW per year over the next 10 years, reaching 80 GW by 2020.

NextInsight: These are very enthusiastic forecasts for the solar energy sector in China. But as everyone knows, Made in China very often doesn’t also mean Sold in China. How do you see the potential to export your equipment overseas?

Apollo: We expect that some 100 bln usd will be spent globally in the solar power sector over the next four years. And newly-added solar energy capacity should total around 20 GW by 2012. More importantly, our specialty – thin-film – should see growth of over 300% during this timeframe.

Of course we don’t plan to overlook the US market, as they are targeting renewable energy to account for 20%, or 400 GW, of total energy by 2020.

In short, we expect solar panels on a global average that use thin-film technology will more than double their share of the solar panel market and reach 31% by 2013 (from 14% in 2008).

Our competitor product in the market – c-Si PV (crystallized pure silicon) requires a tremendous amount of energy to produce polysilicon, prompting Premier Wen Jiabao to issue an urgent order in August of this year calling for the production of crystalline silicon to be reduced.


Read about a Singapore-listed company: ANWELL on roadshow to highlight its solar story

We have 1525 guests and no members online