RIVERSTONE is 'a gem', LEY CHOON has growth prospects

A hidden gem, Riverstone is a nitrile glove maker set to be the next big thing. This river stone is ready to be polished into a true jewel as: 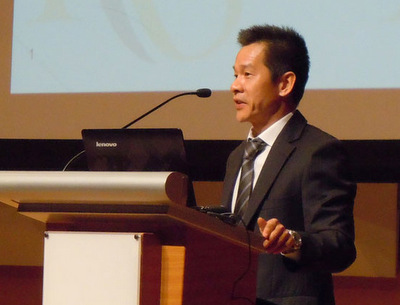 On the healthcare side, Riverstone’s European customers are increasingly asking the company to boost capacity to help them diversify their supplier base, which may potentially triple orders.

If the company achieves its plan of expanding to an annual production capacity of 8.0bn pieces in FY19, we expect its earnings to grow at a CAGR of 22.4% starting from FY13, up more than 4.1x to MYR163.4m by then.
 A wide moat protects its niche. Riverstone’s: i) high brand equity, ii) dominant market share in the high-end nitrile cleanroom glove industry, iii) status as the sole supplier to hard disk drive (HDD) giants, and iv) years of R&D and business experience have led to a wide investment moat protecting the company’s business.
 Low valuation undeserved. Riverstone is trading at a 12.4x forward P/E, the cheapest vis-a-vis the 16.3x industry average, and 2.2x forward P/BV vs the industry’s 3.3x average. It also provides the highest yield.
We believe that the company’s listing in Singapore rather than Malaysia – where glove stocks are better understood – is one reason why investors have missed its sparkle.
 Risks. These include: i) possible pricing pressure arising from expansion in healthcare glove capacity, ii) raw material price fluctuations, and iii) exposure to forex volatility. 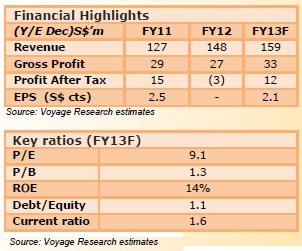 We initiate coverage on Ley Choon with an Increase Exposure rating based on an intrinsic value of S$0.280.

(1) strong order book of S$237m that will deliver accretive earnings up to FY15,

(2) ability to secure more public infrastructure projects with the completion of its second asphalt premix plant, and

(3) establishing a presence in Shandong with a construction waste recycling plant to tap on the increase in development activities. 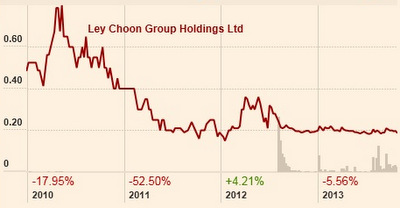 Ley Choon became a listed entity via a reverse takeover of Ultro Technologies in July 2012. Chart: FT.comBased on the company’s existing projects, we estimate FY13 revenue of S$158.7m and net profit after tax of S$12.2m.


Hiap Hoe Ltd took up a 14.9% stake in Ley Choon Group in July 2013 via a placement of new shares at 16.42 cents. Ley Choon provides pipes and cables laying, sewer rehabilitation, and road construction and maintenance. The company is a main contractor for PUB and is a major player for public infrastructure projects. Ley Choon has expanded overseas to Brunei by taking on public infrastructure projects and to China by providing construction materials waste recycling.

We have 644 guests and no members online