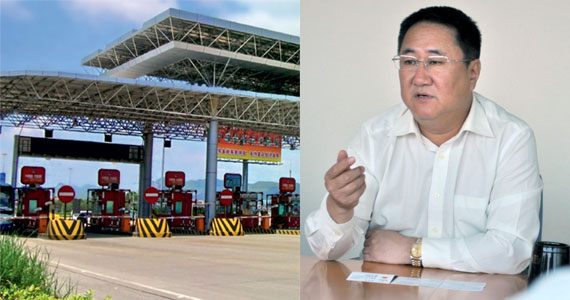 TOLL ROAD operation is a highly stable business with strong cash flow. In addition to this feature of China Merchants Holdings Pacific (CMHP), there is its strong growth story through the acquisition of toll road assets.

The expressway is an important route that connects the deep-water Beilun Port to prosperous regions in Zhejiang, including Hangzhou, Wenzhou and Taizhou.

The latest acquisition will increase CMHP's earnings per share growth by double-digit, and comes hot on the heels of its successful acquisition of 51% in Yongtaiwen Expressway in July last year, which boosted 1H2012 net earnings attributable to shareholders by a whopping 91% to HK$222.4 million.

NextInsight recently met its CEO, Mr Jiang Yanfei, at his Suntec City office for an exclusive interview after the company announced the acquisition of Ningbo Beilun Port Expressway. 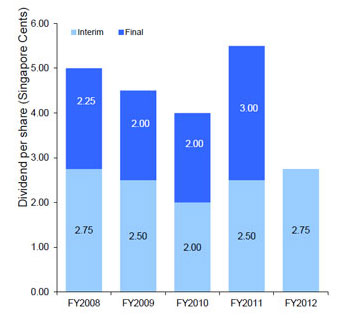 Dividend yield amounts to 7.9% based on the past 12 months' payout and a recent stock price of 72.5 cts.

When it announced an intention two years ago to acquire its largest toll road asset, Yongtaiwen Expressway, for Rmb 2.23 billion, the purchase consideration amounted to almost the size of its market capitalization.

To demonstrate how cash-accretive the deal was, Mr Jiang decided to commit to paying a dividend per share of 5.5 Singapore cents each year. This is 20% to 40% higher than in the preceding years.

The acquisition was completed in July 2011. True enough, the company paid a total dividend of 5.5 cents in FY2011, translating into a generous dividend yield of 7.6% based on its recent stock price of 72.5 cents.

An S-chip which has rewarded shareholders: China Merchants Holdings Pacific's stock price has climbed by 54% over the past 12 months. It closed at 72.5 cents recently. Bloomberg data.

CMHP was able to pay such high dividends because the toll road business, if well managed, is a stable cash cow.

Over the past 5 to 7 years, the growth in toll fee collections has exceeded GDP growth. There are 3 main factors behind toll revenue growth. 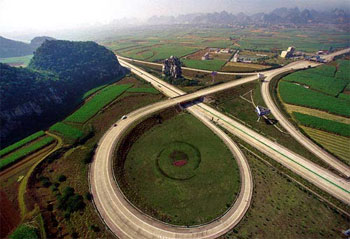 Expressways are an increasingly frequent part of China's landscape.

Firstly, the toll tariff exacted on each vehicle is on the increase. For example, in Guangxi (Guiliu Expressway), the government implemented a toll system with rates that increase with cargo weight.

This is a relatively significant example as the toll fee was adjusted twice totaling as much as 20% over 2009-2010.

Tolls exacted at each station are standardized across the province, regardless of whether the station is owned by CMHP or the government. CMHP’s revenue growth is not determined by rate of toll tariff alone.

A second reason for growth in toll collection is the increasing number of car users with China’s urbanization. It has been said households with a per capita income of US$1,000 are ready to afford cars.

"We are seeing a significant increase in Chinese households pass this threshold," said Mr Jiang.

Thirdly, China’s increasing affluence means there is more logistics demand for all kinds of goods, ranging from personal consumption goods to industrial goods.

Lastly, the growth of China’s export and manufacturing industries also adds to traffic.

Huajian is in turn wholly owned by the state-owned China Merchants Group (CMG), one of the largest enterprises in China.

Including CMHP and indirect interests, CMG has investments in 17 listed toll road operators. Most of these are listed in China.

Among these investments, CMHP has a special status for two reasons. Firstly, CMG’s other investments are non-controlling stakes amounting to less than 20% interest. Secondly, being a foreign-owned enterprise, it is easier for CMHP to raise offshore funds for asset acquisition as well as invest in assets outside China.

Thus, CMG is likely to inject its toll road assets into CMHP, as it did in its asset swap with CMHP for Yongtaiwen. This ensures a strong pipeline of M&A activity for earnings growth. 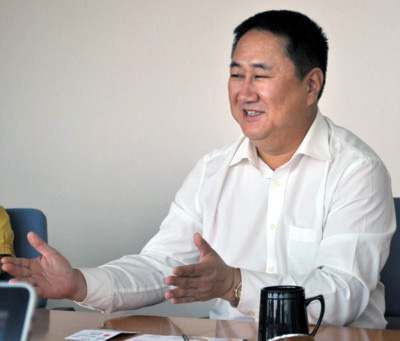 Many of the key personnel from Huajian are from the Ministry of Transport.  Mr Jiang himself was formerly a senior manager of Shandong Provincial Transport Development and Investment Company.

Mr Jiang is highly regarded in the industry and participates in the drafting of protocol used nationwide for the management of toll stations and the maintenance of road infrastructure.

Given the clout of the management and its links with the government through CMG, CMHP has privileged access to the best toll road assets.

Asset acquisition is based on commercial evaluation of merits, unlike other state-owned toll road operators, which may be required to acquire less lucrative sites for political reasons.

Its property business in Auckland, which lost HK$26.6 million before tax in 1H2012, is at odds with the core business of being a toll road operator.

This business segment is more than a decade old and is a legacy inherited from China Everbright, CMHP’s controlling shareholder before 2001.

We have 770 guests and no members online