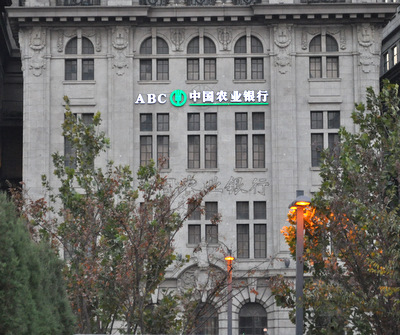 Lenders across China, including this ABC branch in Shanghai, were recently asked to boost their reserves, but interest rates were held steady. Photo: Leong Chan Teik

CHINA’S A SHARES got off to a strong start this week, ending Monday trade up 2.9% at 2,922.95 on solid showings from coal and construction stocks.

The market was noticeably buoyant on central bank inaction.

The People’s Bank of China on Friday ordered lenders to raise their reserve ratios by half a percentage point but did not go a step further and raise key interest rates.

The lack of rate action came as somewhat of a surprise to investors given the announcement over the weekend that November’s consumer price index (CPI), the benchmark inflation gauge, rose 5.1% year-on-year, hitting the highest level in over two years, far above the 4.6% consensus forecast from market watchers.

The raft of economic data also revealed that the country’s producer price index (PPI) leaped 6.1% from a year earlier, also higher than expected.

Despite the reluctance of the central bank to hike interest rates this time around to combat inflation, analysts cited by media are of a mind that rate hikes could be a frequent phenomenon in the months ahead as national leaders have recently stressed the need for more stable prices in the country.

Over the past five trading days, the benchmark Shanghai Composite Index has risen 2.31%, absorbing CPI, PPI and RRR moves in the process.

Thanks to the temporary respite on rate action, major capital-intensive industries saw some of the biggest gains today including coal, construction, shipbuilding and cement.

Railway sector firms continued to thrive on the steady lending rates and a constant drumbeat of support from Beijing about the importance of the industry to the country’s development.

Coal firms, who provide for the vast bulk of the country’s electricity fuelstock, had an extremely strong trading day, as the sector continues to benefit from higher selling prices for the commodity.

We have 2018 guests and no members online