Excerpts from this morning's analyst reports 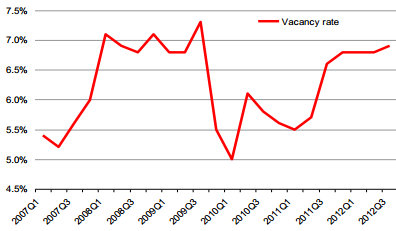 We retain our negative view on the Singapore residential sector as we continue to see a rising threat of vacancy with an acceleration in physical completions in 2013-15.

Vacancy rates for non-landed private units had increased from 5.9% to 6.1%  qoq in 3Q12 as take-up continued to lag physical completions.

This will be compounded by impending completion of HDB units following aggressive building in the last three years. Around 83% of local residents still live in HDB flats. Incremental demand should also come under pressure from the Singapore government’s continuous reassessment of its liberal immigration policies.

PR conversions have tapered off, a glimpse of how tighter immigration is taking shape. Rising inventories against normalised population growth do not augur well for future take-up, in our view. While prices remain at record highs on low interest rates, policy risks remain an overhang.

We forecast that physical residential prices will fall by 5% by end-FY13, with vacancy rates for private units up from 6.1% currently to 7.2%. We retain our Underperform view on CityDev and see value in laggards such as Wingtai and Hobee. 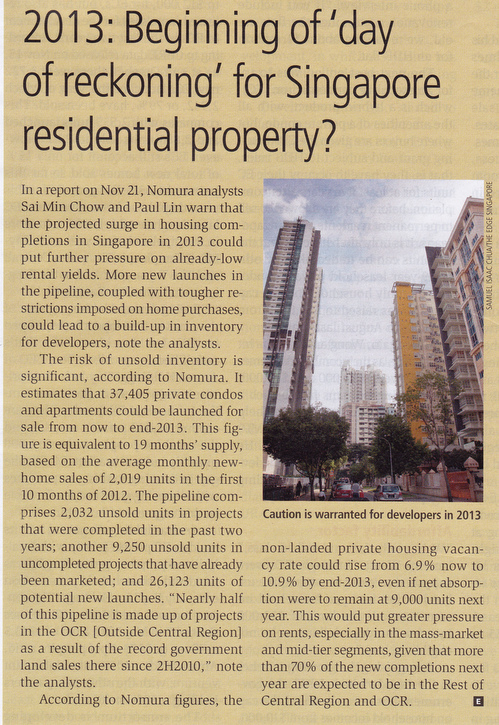 This article is among a bunch of property articles in this week's edition of The Edge weekly. Go get it at the newsstands for $3.80.

Noble has underperformed the FSSTI by 13% (-13.3% vs FSSTI’s 0.3% decline) following the  announcement of its 3Q12 results on 8 Nov 12, which were below expectations. We upgrade Noble from SELL to HOLD as the stock has become less expensive when weighed against our valuation of S$1.17. 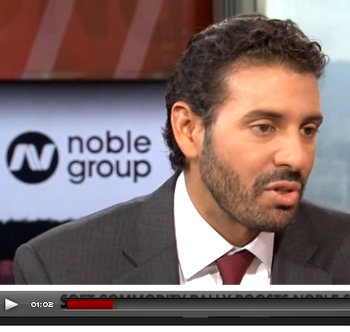 Yusuf Alireza became CEO of Noble Group in April 2012. He bought 7.25 million shares of Noble on Nov 15 at $1.0803 apiece. That was his maiden purchase of Noble shares.
Screenshot from Bloomberg TV interview

Recent insider transactions could set near-term boundaries. On 15 November, Noble’s vice-chairman Harindarpal Singh Banga sold 225m shares at S$1.10. Following the sale, he ceased to be a substantial shareholder of the group with just a 2.27% stake (previous: 5.74%).

Upgrade to HOLD from SELL. Our change in recommendation comes as stock price has declined and stabilised at a more attractive price range.

There is no change to our target price of S$1.17, which is pegged at 1.3x P/B (excluding perpetuals), derived from a dividend discount model (required rate: 9.7%, terminal growth 2.3%).

We have 1232 guests and no members online