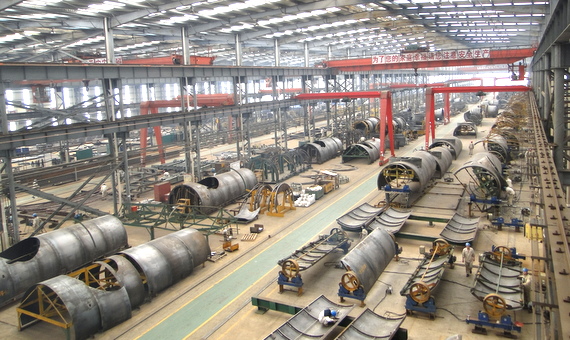 'Trojan' is the nick of a shareholder of Renewable Energy Asia Group who contributed the following article. 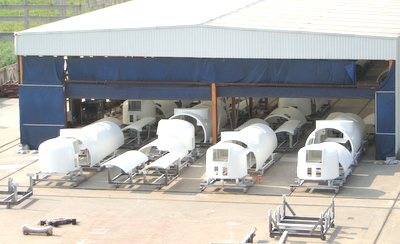 THE FORTUNE of many Chinese renewable energy companies may be clouded by an economic slowdown, a tightening of the PRC credit market, as well as rising raw material costs, but Catalist-listed Renewable Energy Asia Group (REAG) is positioning itself favorably.

Renewable Energy Asia Group Limited is engaged in the investment and development of renewable energy projects in China. 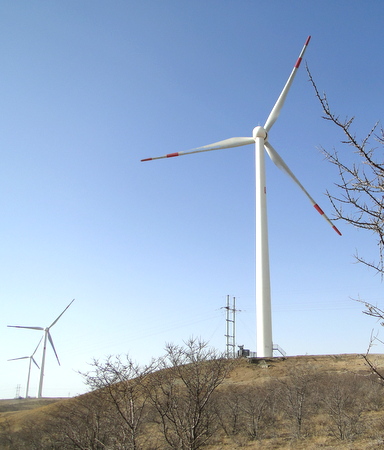 REAG's wind farm in Inner Mongolia, which is operated by its JV (named Datang Baotou) with Datang Renewable Power.

The company's core businesses include: (a) wind and solar farm investment and operation; (b) manufacturing of wind turbine components and systems; and (c) engineering, procurement, construction and maintenance of wind and solar farms.

As a shareholder, I met recently with Financial Controller, Soh Yeow Hwa, to understand the business better.

Here are some key takeaways as well as my background research on the renewable energy industry:

These farms typically take much lesser time to construct and start operations as compared to wind farms.

REAG has some experience with wind farms – it holds a 49% interest in Datang Baotou, which owns and operates a 49.5MW wind farm in Inner Mongolia.

This project contributed RMB 7.8 million to REAG’s profit for FY12.

The JV is with Datang Renewable Power, one of the largest state-owned renewable energy companies in China.

REAG recognizes the opportunity presented by the falling cost of solar panels. It is at an all-time low due to oversupply. REAG is developing a solar farm with 9MW capacity which is expected to be completed by end-2012.

Another project, a 10MW solar farm in the Zhenglanqi Green Energy Park in Inner Mongolia, is expected to be completed by end-2013

REAG has just received approval from the Gansu Development and Reform Committee for a 30 MW farm, and is seeking concessions to develop more solar farms.

>> JV with Datang: REAG has also formed a joint venture company with Datang Renewable Power, to carry out EPC and manufacturing projects.

Such partnerships with big players would help REAG tremendously in its bid to remain competitive as the industry consolidates.

>> New way to fund capex: Developing solar farms requires huge capital expenditure. With its stock price at a low of  4.1 cents), REAG is seeking alternatives to fund-raising via issue of shares.

>> Macro picture: The development of renewable energy remains a key focus and priority for the Chinese government as part of the PRC’s 12th Five-Year Plan.  China aims to expand its installed wind power generating capacity to 100GW by 2015, while solar power capacity will total 21GW.

It has also recognised the problems associated with grid curtailment, and has put in place policies and practical measures to alleviate the situation.  A new renewable-portfolio standard, to be implemented by the end of 2012, will force power companies to generate a mandatory proportion of their energy from renewables, with penalties for those that do not.

An upgrade of long-distance power lines, to transfer energy from wind or solar farms in the remote parts of China to the energy-hungry east, was approved last year.

Improvements are likely to be seen in the next year or two, and this would be a positive catalyst for REAG's revenue and profits in the years ahead.

Meanwhile, REAG's manufacturing business has achieved a high industry standard and is currently certified by Siemens to manufacture wind turbine components for supply to the US and Europe.  Moving forward, REAG is diversifying its clientele base to include other reputable customers from different countries.

Overview of REAG's factory in Haimen city in Jiangsu Province.

>> Offshore op: REAG is also exploring opportunities in the offshore wind sector, and has laid the cornerstone for its development in this sector.

In Feb 2012, the Group announced the acquisition of land use rights for a 187,783 sqm land parcel in Haimen on the north coast of the Yangtze River. REAG plans to construct harbor and manufacturing facilities as a first step towards developing an offshore wind energy hub to support its venture

>> Parent IPO: REAG's parent company, Jiaolong Heavy Industries, is planning an IPO in 2013 which could value the company at RMB 6 billion. If successful, REAG's financial backing would be strengthened significantly.

The poor performance for FY11 (which resulted in an approximately 33% one-day drop in REAG’s share price in May 2011 from 18 cents to 12.5 cents) was primarily due to REAG’s manufacturing segment, operated by its subsidiary Renewable Energy Asia (China) Co. Ltd (REA China), especially in the second half of the financial year. 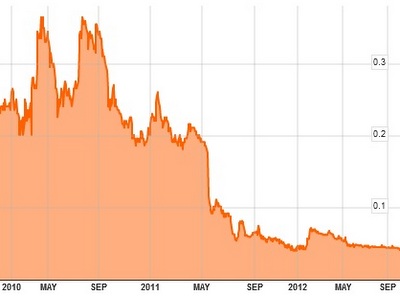 REAG recently traded at 4.1 cents for a market cap of about S$30 million. It doesn't have a PE as it was loss-making in FY12 ended June. Chart: Bloomberg

During the period, a major customer had requested for changes in the production specifications of its order, resulting in a delay in production.

Quality problems were also discovered in another manufacturing project which created a bottleneck in the production process.

The resulting fall in production volume led to a higher per unit cost of production and weighed down on REAG’s full year performance, as REA China was REAG’s sole revenue contributor for FY11.

The quality issues have since been rectified as the Group optimised internal processes and improved quality control at its manufacturing plant.

In addition, it has also been awarded the Quality Certification for Standard for Steel Building Structures by the American Institute of Steel Construction and the Certificate of Authorisation by the American Society of Mechanical Engineers (ASME) to apply the ASME Mark to pressure vessels.

0 #2 ray 2012-10-26 19:44
I am in this, ard last year CNY... it was high and i saw the potent very much mentioned above.... but the 1day drop 33% was really rubbish... well tat time i was young, din know much of the risk in this industry, esp in s-chip.... once back to water level, i will immediately let go...
Quote
0 #1 Erelation 2012-10-22 11:18
This is one s-chip that I will consider buy and hold. 100mil Interest free loan from insider... Shows confident and commitment in the company. Solar farm and wind farm once in operation should generate long term recurring income.
Quote
Refresh comments list
NextInsight.net

We have 531 guests and no members online