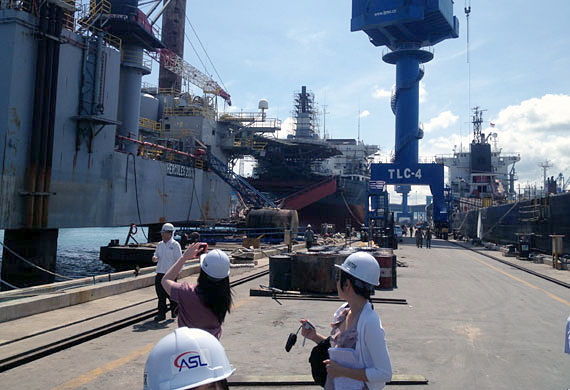 At a visit to ASL Marine's shipyard in Apr, analysts check out its refurbishment works on a contract to reactivate a semi-submersible oil drilling rig. Photo by Romil Singh.

* ASL Marine’s (ASL) diversified business model means it is positioned to capitalize on the recovering newbuild market (driven by offshore support vessels), while still being supported by its healthy shiprepair and chartering operations.

New order flows dwindled after the 2008 credit crunch and yards that had a heavy dependence on shipbuilding operations were very much affected but, ASL weathered the crisis better than its peers partly due to its business model 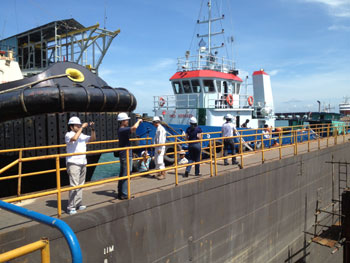 Analysts on the wall between ASL's drydock and waterfront. Photo by Romil Singh.

* For the repair and conversion division, the group will focus on securing more conversion and major repair and refurbishment jobs for FSOs, FPSOs and oil rigs (there are currently six older jack-up rigs that are under repair/upgrade in ASL’s yards). The group has also expressed its desire to develop its capabilities in offshore fabrication works.

However, FY2013 is likely to be a backend-loaded year for the shipbuilding division. Meanwhile, ASL also has an outstanding order book of about S$59m with respect to long-term ship chartering contracts.

* We expect ASL to double its capex to about S$115m (mainly to expand shipcharter fleet and deepen waterfront) in FY2013 compared to just S$67m in FY12. With an upside potential of about 27%, we maintain our BUY rating on the stock with S$0.82 fair value estimate. 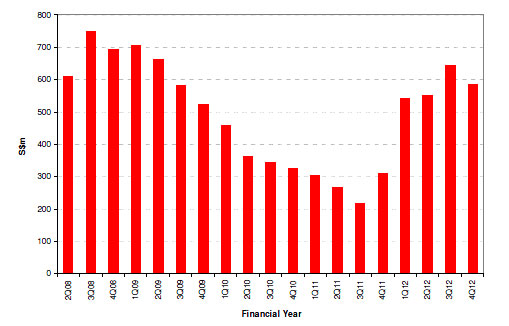 ASL's outstanding orderbook is recovering as it enters the tail-end of the delivery cycle of the previous shipbuilding boom.

The monetary boost of QE3 will lift consumer demand, which will increase demand for container shipping. Co photo.

* We revise our forecasts to account for a demand-led container shipping recovery, and upgrade NOL from a SELL to a BUY, advising an early entry into a stock, which we believe could now return to profitability in 2013.

2014 further tips the balance in its favour due to a more subdued capacity growth. The resulting low-interest rate environment should also mitigate concerns regarding financing costs.

* NOL had been embarking on a cost-saving drive to the tune of USD500m for 2012, which had been reported to be well on the way to fulfillment.

* While the demand-led boost to global trade will likely only partially mitigate the daunting 10% increase in 2013 supply, 2014 should provide the clear light at the end of the tunnel with a relatively subdued 4% increase in supply year-on-year. It is this visibility for profitability that would reap investors plump rewards for an early entry now.

* Calling the bottom now, upgrade to BUY. Our revised forecasts point towards a return to profitability in 2013, and we believe it would trigger a re-rating of the stock to a 1.2x P/B from current ~1.0x P/B. We advise investors to take advantage of residual weak sentiment from NOL’s exclusion from the STI to own a stock well poised to ride the recovery cycle. Upgrade from SELL to BUY, with Target Price of USD1.35 pegged to mid-cycle 1.2x FY2013 P/B, implying 20% upside.

Salalah is a power and desalination that SembCorp Industries built for Oman Power and Water Procurement Company. Co photo.

* Following its strong 1H12 results and the increased visibility of its pipeline projects, we raise our EPS estimates by 28-45% over 2012-14F.

* With a strong pipeline of utilities projects coming on stream, SembCorp Industries' (SCI) recurring core earnings should contribute >50% of its group earnings (30-40% in 2009-11) going forward, in our view.

* In view of its broadening core earnings base, we believe that SCI’s share price performance will gradually decouple from that of Sembcorp Marine and investors should be attracted by its increased defensiveness, with beta optionality from offshore order momentum.

* Among its major project pipeline, we highlight the Salalah IWPP, which began to contribute significantly in 2Q2012. According to management, the Salalah IWPP is slated for listing in 2013/14 and we estimate that it could be worth as much as USD244m. While the incremental valuation impact is marginal, we believe the project epitomizes SCI’s ability to scale its utilities’ franchise globally and recycle its capital efficiently.

The 2 analysts failed to mention that ASL Marine has a very high level of net liabilities in terms of bank loans and borrowings which is higher than some of its peers in the industry. As at Y/E 30 Jun 2012 it has total liabilities to banks at $294m (including outstanding derivatives) against its cash & bank balances of only $95.5m. Its net liabilities to banks at $198.5m is quite large when compared to another peer in its class, Jaya Holdings, which has only a net debt position of US$45.9m (S$56.5m) Y/E 30 Jun 2012. This is an aspect eagre investors should take note of. The reason why it was able to ride over the credit crunch of 2008 was because it had a specified debt retirement schedule and was able to meet its obligation when the regular instalments were due. Jaya Holdings, on the other hand, got into a "fix" during that period because all its bank liabilities were on repayable on demand, i.e. recallable at short notice, usually 7 days, and given the panicky scenerio back then such facilities were considered risky by banks because there were no loan retirement schedule, which prompted their recall of loans.

However, ASL Marine's net liabilities position is not as bad as Otto Marine, which actually has a net liabilities to banks at US$474.9m (S$584m). It has total bank liabilities of US$527m against cash & bank balances of only US$52.1m, which is a bit alarming. The figures are as at 1H 2012.
Quote
Refresh comments list
NextInsight.net

We have 1033 guests and 2 members online