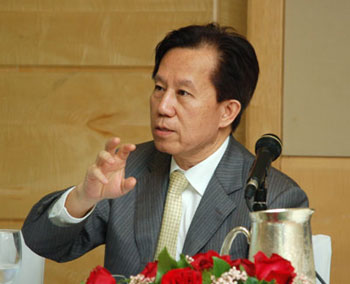 Raymond Wong, CFO, China Gaoxian. File photo by Sim Kih
THERE IS something puzzling about China Gaoxian: Despite major production capacity increases this year, the company reported minor revenue growth in the first 9 months of this year.

One of the key areas of investment was the acquisition of 100 sets of warp knitting machines in 1H2010, which increased Gaoxian’s annual maximum production capacity of warp knit fabric, a high-end fabric, to 81,000 tonnes by end of FY2010 from 17,000 tonnes previously.

In a meeting with analysts yesterday, Gaoxian CFO Raymond Wong clarified that the company's new production machinery needed time to be tested after they were installed. And some of the existing older machinery underwent downtime for servicing and upgrading.

He said more meaningful revenue growth can be expected next year as well as sustained gross profit margins.

Indeed, what he said echoed the company’s press release last month (November) which said that its growth rate would pick up from 4Q2010 as new capacity came on stream.

The executive chairman, Mr Cao Xiang Bin, was quoted saying: “Our growth rate will no longer be constrained by production capacity going into 4Q2010. With the newly installed capacity of both premium differentiated polyester yarn and fabric products, we can kick start more aggressive marketing efforts to meet the strong demand from PRC customers.” 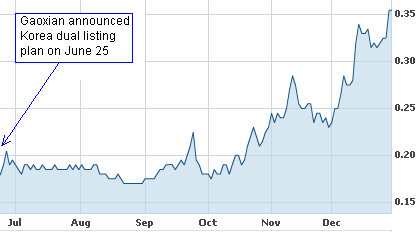 This will counter the dilution in earnings per share that Gaoxian will suffer following its dual listing in South Korea, which is expected in a matter of weeks.

Gaoxian will issue up to 600 m new shares to its existing 1.44 billion shares.

The listing rules state that the price at which new shares can be sold should not be at more than 10% discount to the to the weighted average price for trades done on the SGX-ST for the full market day on which the placement or subscription agreement (or, as the case may be, the underwriting agreement) is signed.

While the rule is designed to protect existing shareholders, there is no restriction on the premium that new shares can be sold at since this would be in the interest of their company.

It may yet materialise that in Gaoxian’s case, the share sale could be at a premium to the Singapore price, given that its Korean peers trade at a higher average PE of 16.

Gaoxian's historical PE is about 6 based on its stock price of 39 cents yesterday in Singapore.

The actual sale price of its new shares will be fixed after a book building exercise whereby the underwriter will solicit 'buy' orders from fund managers who indicate the number of shares they desire and the price they are willing to pay. 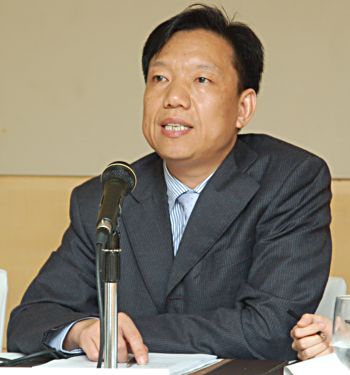 In any case, investors are expecting some upside from the dual listing although Gaoxian’s stock has appreciated more than the 100% in the past six months as it progressed towards a Korean listing.

If its shares in Korea trade at higher valuations, investors can buy the Singapore shares and sell them in Korea for an arbitrage profit. Given this fungibility of the shares, over time, the valuation gap is expected to close.

Another positive from the dual listing is the funds raised, which will go towards building a new plant that is vertically integrated - it will manufacture PET chips for Gaoxian's core business of manufacturing polyester fibre for sale to external parties who make apparel, etc. This new plant will incorporate continuous operations - from producing PET chips to the end-products which are polyester fibres.

Work on the facility – whose land cost of RMB200 m has been paid from Gaoxian’s cash reserves - has started and will be completed by around mid-2012.

We have 605 guests and no members online