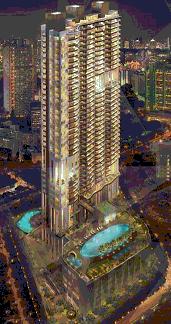 UOL's Spottiswoode Residences was about 90% sold at its launch this month.

EVEN THOUGH the market appears to be dismissing recent measures to curb speculation in residential properties, in a report dated 24 Nov, Nomura cautioned that the government can implement unexpected measures that could negatively surprise.

It recommends United Overseas Land, Allgreen Properties and Keppel Land as the most defensive property stocks in Singapore, with significant exposure to commercial properties.

Having sold most of its inventory following the recent launch of Spottiswoode Residences, Nomura believes UOL is
1) least concerned with further government intervention; and
2) well-capitalised to tap land-banking opportunities.

Nomura estimates that about 45% of UOL’s intrinsic asset value is in commercial properties in Singapore, which are defensive compared to private residential properties.

UOL is trading at at about 30% discount to NAV (vs sector weighted average of about 15%), an undemanding valuation.

While Allgreen has unsold inventory, most of its land bank was acquired at lower costs during the previous cycle.

Like UOL, it is also well-capitalised to tap landbanking opportunities, has over 40% representation of its intrinsic asset value in commercial properties in Singapore and is trading at an above-average discount of about 45% to NAV.

In addition, the FY11F dividend yield of 3.4% is decent by developers’ standard.

About 39% of its intrinsic asset value is in commercial properties in Singapore and the bulk of these are stakes in prime international Grade A office assets.

The risk to stocks trading at discount to asset value, according to Nomura, is that: in event of a worse-than-expected economic performance, discount to NAV will widen as housing and leasing demand slows.

We have 232 guests and no members online