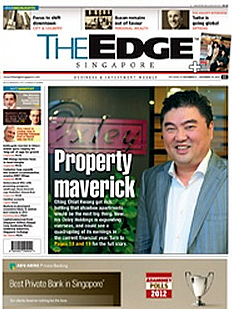 Ching Chiat Kwong got rich betting that shoebox apartments would be the next big thing. Now, his Oxley Holdings is expanding overseas, and could see a quadrupling of its earnings in the current financial year. OXLEY HOLDINGS and its gung-ho CEO, Ching Chiat Kwong, are the cover story of the current edition of The Edge Singapore.

While the story by Michelle Teo covers largely the business aspects, it also delivers interesting insights into Ching's background and early career.

He was born in 1965 to Shanghai migrants and signed on with the Singapore Police Force after serving national service -- partly in order to help his parents succeed in their application to be Singapore citizens.

Subsequently, he studied sociology at the National University of Singapore, graduated with an honours degree, and rejoined the police force.

Two years later, he gave up his police uniform, tried his hand at making and selling otah before becoming a small-time contractor, taking whatever jobs he could get.

That included cleaning sewers at a wet market in Bt Merah, where he was spotted by family friends who then told his shocked parents of his work. "I had lied to them, told them I was doing a proper job with government contracts," Ching recalled. "(My mother) cried."

His prospects started to brighten when he began building showflats for property developers, including the Fragrance Group.

Learning about the business, he raised "a few hundred thousand to a million dollars" by taking a mortgage on his home, and bought a small plot of land. The project became the 48-unit Tyrwhitt 139 in Little India.

"Before (the launch), I woke up in the middle of the night, vomitting. I thought I had food poisoning. But it was stress and the fear of losing everything. Because it was the first time I was involved in a development, and I was alone."

The Edge Singapore is on sale at newsstands for $3.80.

+3 #2 Ng Christina 2016-12-10 06:47
Dear Mr Chin Chiat Kwong
I'm writing to you to express my utter disappointment with the kap residence. The quality is really appallingly, very substandard, there is no QC check before the handover. The quality is worse than that of HDB. The carpentry work is horrendous. The poor quality glass used for the stairs and windows all filled with scratches. All the drawers are not workable. The jacuzzi is just placed in the balcony, filled with dirty water from the roof which could soon be a breeding area for Aides mosquitoes. The scratched wooden railings and the wooden door, the fridge, hob that is not installed properly, the horrible looking washing machine of poor quality placed smacked in the middle of the living hall.
I'm sure you understand how I'm feeling as you've also started from humble background.
Appreciate your kind attention on this.
Thanks and Regards
Christina Ng
Hp: 97727857
Quote
+1 #1 jason yek 2014-08-29 09:35
Dear Mr Ching,

I have grown to admire your business sense of acumen. your patient and hard work as well your courage to venture into an unknown world.... that's is high risk business...than k goodness you have made it...

you will always be my idol....I hope to learn from you.
Quote
Refresh comments list
NextInsight.net

We have 1031 guests and no members online