MIDAS: Will its train recover speed fast next year? 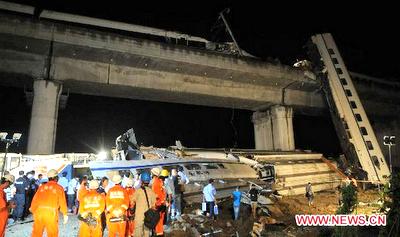 In Wenzhou in July 2011: Two high-speed trains collided due to a faulty signalling system, killing 40 passengers and injuring about 200.

THE FALLEN stock price of Midas Holdings was a key grouse of shareholders at its recent AGM which attracted a crowd of a few hundred shareholders.

Midas -- which manufactures aluminum alloy extrusion products used for making train bodies -- has a large shareholder base of 16,900 shareholders, of whom individual investors make up a relatively high proportion.

CEO Patrick Chew, 49, and executive chairman Chen Weiping, 51, are the top 2 shareholders with 10.8 and 10% stakes, respectively.

(This stock is discussed in the NextInsight forum thread here.)

Patrick Chew explained what had happened in the high-speed railway industry in China, and asked shareholders to patiently wait for the Chinese government to re-start its rail expansion programme.

1. Sunk share price: The stock has fallen from around 95 cents at the start of 2011 to just 37 cents recently.

Patrick Chew said: “Our share price has been affected by the turmoil in the Chinese high-speed rail industry." 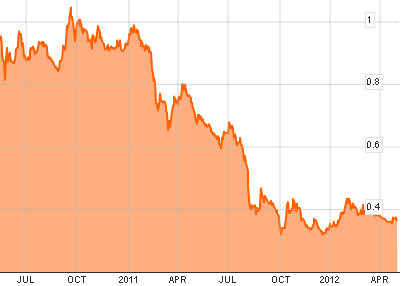 Midas stock price is down about 60% from the start of 2011 for a market cap of about S$450 million. Chart: Bloomberg.

He recapped the sacking of the Minister of Railway in Feb 2011; and the serious high-speed train collisions in Wenzhou in July.

Subsequently, nationwide checks were carried out on rail safety, leading to a drought in tenders launched for train projects and a suspension in construction of projects that had already started.

But in 2H, Midas added just another RMB64 million to its net profit.

Mr Chew said Midas would have suffered even more if it had depended solely on high-speed train projects – instead it also had metro train business and exports.

“Before the global financial crisis, yes, our share price hit as high as $2.30. Other companies also did well. One company hit $8 but now it’s $1.

“But at least now we can see some light at the end of the tunnel. Chinese media reports said the Ministry of Railway will be coming out with new tenders.”

2. Excess production overcapacity: In 2009, 2010 and 2011, Midas added a lot of capacity after taking into account the government’s massive rail programme.

Patrick Chew: “Who could have expected the things that happened last year?”

Midas’ expansion led to a spike up in costs in administration, labour, operating, etc.

3. Weaker financials: A shareholder pointed out that borrowings have gone up 2.5X in FY2011, the cash holding was down 50%, and the free cash flow has turned negative. What’s Midas’ orderbook and what’s its strategy now?

Patrick Chew, CEO, Midas: “We hope this is a transition year and hopefully by next year we will see a recovery."

While waiting for the PRC high-speed rail orders to return, Midas is pursuing metro projects which are growing as well as export orders from Bombardier, Alstom and Siemens. “I’m optimistic that orders will flow through.”

Regarding the higher borrowings, Patrick explained that Midas’ receivables were piling up as the Chinese Ministry of Railway faced credit issues. “We were not paid as regularly as before, so we had to borrow more in 3Q and 4Q.”

But the turning point was at end-2011, when the MOR issued bonds to raise funds and the Ministry of Finance injected funds into the MOR, totaling RMB200 billion.

Patrick: “It was only last year that we were in a net debt position. Previous years we were net cash. If we were not so prudent, our balance sheet would not have the ability to go for short-term funding.”

4. Inventory more than doubled: Why from RMB190 million to RMB478 million, when Midas has a RMB800 million orderbook?

The CFO, Tan Kai Teck, explained that deliveries to customers slowed down as projects were suspended and customers had not received regular payments from the Ministry of Railway.

In the meantime, Midas had kept its production going.

Midas’ key customers are state-owned enterprises which used to observe credit terms of 90-120 days, but these have gone up to over 200 days.

Prospects are looking better, though. As at end-2011, not only has the Ministry sold bonds but Midas’ customers have done some equity financing through placement of new shares and through rights issues.

5. Why new JV? A shareholder questioned the wisdom of Midas increasing production capacity through a JV (Jilin Midas Light Alloy) where Midas has to inject another US$25 million, leading to more financing costs, etc.

Patrick Chew: Midas would produce products to diversify its reliance from the railway sector, a move that is necessary since China's current 5-year plan ends 2015 and its commitment to rail expansion in the next 5-year plan is yet to be unveiled.

The JV capex can be capitalised and won't hit the profit & loss statement, said Patrick.

6. Brighter outlook: CEO: “We hope this is a transition year, and hopefully by next year we will see a recovery. Wen Jiabao (China premier) has said that China’s funding and development for rail will go according to plan.”

0 #10 mini 2012-07-23 08:58
Ha! from 28 cents to 38 cents. Speed is picking up. Target 48 cents in 3 months time.
Quote
0 #9 Ignorant 2012-05-30 06:14
Overhyped stock...Chinese investors already shun railway stocks long ago after the scandal.
Long AR days is here to stay as the rail operators have problems getting access to funding. Open your eyes wide when going in as analysts are not independent.
Quote
0 #8 Henry 2012-05-15 04:03
overbuild of capacity in anticipation of orders vis-a-vis hugh budget
provision to Ministry of Rail...but punctured by the corruption scandal of Minister and subsequent suspension of funding. The overbuild plus financing resulting therefrom plus the inventory buildup will cause a huge financial strain on the company. Furthermore, what happens to the investigation and
if any of the Ministry's suppliers are implicated is still unclear. A
number of risks here ...overcapacity , financing cost, inventory and holding cost, political risks, translation risk, high interest lurking...too
Quote
0 #7 Henry 2012-05-09 08:00
the Minister was charged with corruption...ma ny kaki also kena charged, many suppliers also kena no business, Midas capacity built big big...now empty never mind, kena interest rate higher, material cost higher, manpower cost higher, some more brother support brother, cash also went out...now breathing through the mouth like nose block
Quote
0 #6 Shiva 2012-05-09 06:59
Had to eat the humble pie on this one and cut loss at 0.33. Important lessons learnt is never to pick the bottom and instead wait for reversal. Also, if FA is pretty bad, it would be very hard to go up but very easy to go down.
Quote
0 #5 Kit 2012-05-09 04:15
Midas yesterday warned of a significant drop in its unaudited revenue and net profit for the three months ended 31 March 2012 as compared to prior year Q1, citing higher operating expenses and finance costs, plus share of loss from its associated company, Nanjing SR Puzhen Rail Transport Co., Ltd. Don't get electric shock when Midas release their results on 14 May. Don't blame them for not telling you first hor.
Quote
-1 #4 LowCS , CPA 2012-05-08 18:10
We are glad Midas is part of the greatest railway network in the world.

However, it is a pity Midas' share price hit a low of 35 cts from a high of $2.30 (more than 6 times lower!). I emphathise with those who have incurred huge losses, contrary to their once great expectation.

Midas received accolades for good service from the Chinese rail authorities. It also won the the Best Investor Relations Award in Singapore and was Forbes Asia's best company in its market capitalisation category at one time.

To me, all these are meaningful only when Midas can continue to command respect from investors and able to hold its share price at a premium. As it is, Midas is relegated to the s-chip league that is beset with accounting irregularities and poor management.

I therefore call upon Midas' Board and Management to communicate more closely with the investing public whenever positive news arise, be it a stronger order book, brighter business outlook, additional income streams, a healtheir cash flow, and a stronger income statement and balance sheet. This is one way it can hope to distance itself from defaulting s-chips and improve public sentiment and perception.

I believe an appropriate dividend policy and share buy-back scheme will help Midas stay ahead of the 'black sheep'.

Its operating performance wasn't that bad, somehow able to maintain a steady gross operating margin of 34 - 38 % in the last 5 years... but the control of general overheads and finance charges in 2011 was disappointing , up almost 60% . One other point of concern is the collectibility of its receivables, especially the aftermath of the problems that happened within the Ministry of Rail , payments were withheld to Midas' customers ( 5 of them formed 70% of the aluminium extrusion revenue and with one taking up 31% of the revenue alone.). Looks like what the CEO said, wait patiently for what's next to happen...
Quote
0 #2 Shiva 2012-05-06 06:31
The TA has not changed from my last update. But based on the article, it would be prudent to see the commitments come to fruition before taking positions. I am vested by the way at 0.355.
Quote
0 #1 Kit 2012-05-06 06:15
MIDAS must do something extraordinary in order to generate greater demand from retail investors and the general public. The big boys have found it hard to push up the share price without mass participation from retailers. Not only should they deliver good results, they should make their order book more transparent, inform the public the projected earnings over the next two years and how they could deliver those earnings on target, as well as pay good dividend of more than 10% of current share price. Only then, you will see tremendous interest from retailers. It is another S-chip again...
Quote
Refresh comments list
NextInsight.net

We have 3362 guests and no members online