Click on above 64-second video for a short virtual tour of the XMH warehouse and glimpse the marine diesel engines and power generators awaiting delivery to customers. To increase the video quality, place your mouse over the 'Change quality' icon at the bottom of the video.


I LEARNT about XMH Holdings' cash generation prowess from a recent visit, along with several analysts and fund managers, to the company in Sg Kadut last week.

The prowess stems from, to begin with, its customers (such as shipyards) paying a 20-30% cash deposit when ordering diesel engines through XMH, the distributor. They pay the remaining amount before the engines are delivered to them. 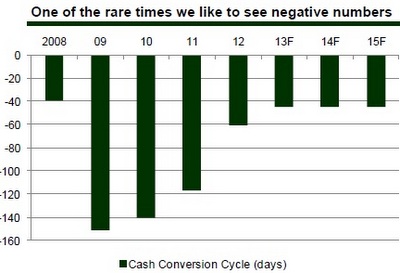 Generally, this cash payment term is an industry practice.

On the other hand, XMH does not pay its principals immediately as it enjoys credit terms from some of them.

XMH enjoys a special status with Mitsubishi, in particular, as its largest worldwide distributor for marine diesel engines for 7 consecutive years since 2005.

Being a distributor, XMH's capex is insignificant.

All that helps explain the S$47 million cash that has piled up in the company as at end-October 2012 -- as well as why XMH’s cash conversion cycle is consistently negative. 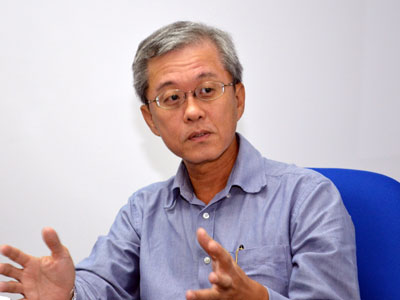 Businesses with negative cash conversion cycles are rare in any industry.

In a 28 Nov 2012 report, OSK-DMG analyst Lee Yue Jer estimated that, based on a conservative 5% revenue growth assumption, XMH can generate $10 million per year in free cash flow in each of the next three years.

(However, XMH management reiterated its ambition to expand its business, which implies M&A and expansion of  its physical space. Sooner or later, a good fit is bound to happen, and some cash will need to be deployed).

Still, there will be support for dividends to shareholders. In each of the past two financial years since its listing, XMH has paid 1 cent a share.

The OSK-DMG analyst reckons that XMH can easily raise its dividend to 1.3 cent (equivalent to a 50% payout ratio) translating into a 4.7% yield based on the recent stock price of 27.5 cents (market cap: S$106 million).

"At the very minimum, it can easily sustain the current 1¢ dividend indefinitely. This is a stock that pays investors to wait for the full value of its cash, whether in special distributions, new investments, or M&A, to be realised," wrote Lee Yue Jer.

In a Jan 25 update, the OSK-DMG analyst raised his target price for the stock from 26 cents to 32 cents.

The valuation is 8x FY13F EPS plus 75% of its net cash (factoring in an investment plan for inorganic growth).

However on a discounted cashflow basis, he derived a value of 45 cents.

XMH derived 87% of its revenue in FY12 from distribution and provision of value-added products and
services. While Mitsubshi accounted for the vast majority of that segment's revenue, XMH also distributes several other brands of engine. 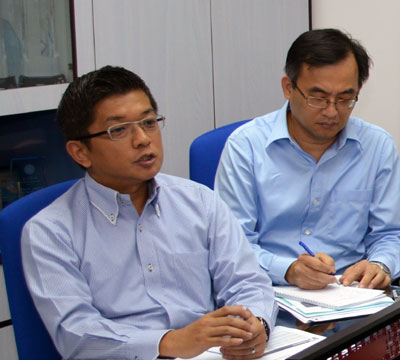 The Mitsubishi 1,000 horsepower engine is the best-selling.

The remaining 13% of XMH's revenue comes from after-sales services, trading and others.

Think of the countless tug boats hauling barges (and, increasingly, another vessel category - self-propelled barges) laden with coal and crude palm oil, for example, along rivers, from island to island, or from jetty to ships.

These are the key vessels using XMH's engines, although there are other vessels types too, including  ro-ro ferries, and pipe laying barges.

What about forex risks in this business?

XMH sells in the currency which it orders the engines in -- thus its customers pay in yen for Mitsubishi engines sold by the principal in yen. The one area of exposure is in spare parts -- XMH buys in USD and sells in SGD.

For more on XMH, including recent corporate developments, click on the stories below.

We have 396 guests and no members online