Four more BOT projects will be completed over the next six months.

Asia Environment’s projects span the length and breath of China - Jiangxi and Hunan in the south, Jiangsu’s coastal cities and Shanghai in the east, and Heilongjiang’s capital, Harbin, in the northeast.

There are jobs aplenty in China's booming water treatment industry for Asia Environment, which was founded in 1984 by an engineer, Wang Hongchun, in Yixing near Lake Tai, China's third largest lake.

Wang, the 43-year-old CEO, has received accolades from Chinese authorities for his contribution to irrigation technology.

Design and production of filtration systems and other water treatment equipment have always been Asia Environment’s core expertise.  The popular ‘Penyao’ industrial filters are designed, produced and sold by the company.

It has moved up the value chain, taking on turnkey contracts, and in recent years, building and operating water supply and sewage treatment plants (BOT, BOO and TOT plants).

Construction of its first BOT wastewater treatment plant was completed in Nanchang in 2006. Plant building and operation contributed 70% of group turnover in FY2006. 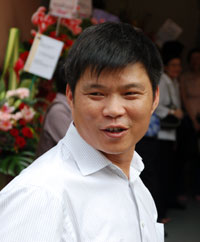 The next decade will see sustained municipal demand for water infrastructure, he says.Chinese authorities are placing greater attention on water supply and sewage treatment.

For example, when a massive algae outbreak in Lake Tai June this year cut off for days tap water supply for 2.3 million residents of Wuxi, a thriving Jiangsu industrial city, authorities immediately implemented a myriad of measures the following month.

These measures, which include limits on microbe content, organic matter and disinfectants, augur well for Asia Environment with its technical edge in filtration systems.

Currently, China can only treat 30% of organic substances in water drawn from natural sources, according to China’s Disease Prevention and Control Center.

The remaining 70% of organic substances in most water works systems emerge from the taps of consumers.  To make matters worse, more than 70% of China's rivers and lakes are polluted and more than 50% of its urban groundwater contaminated.

Municipals, which form the bulk of Asia Environment’s business, are likely to up contract values for more demanding project requirements, figures Wang.

Pollution incidents such as the massive algae outbreak in Lake Tai last month have prompted China’s Ministry of Health to roll out a nationwide effort to inspect water quality.  Under pressure from the central government, municipalities are speeding up the development of local water infrastructure by raising tariffs payable to BOT plant operators.

Water prices in cities may continue to rise 50% to 100% over the next five years, according to Ministry of Construction’s Vice Minister Qiu Baoxing. Qiu’s comment on government measures to curb the squandering of scarce water resources was reported in November 2006 by Xinhua news agency.

Nationwide, the cost of residential water use has already risen 42% from 2000 to 2005, according to a survey of 36 cities by China’s National Bureau of Statistics.

Water tariffs across China have been on a steady uptrend.  Beijing, with its severe water shortage, has raised water tariffs nine times in 15 years to RMB 3.70 per cubic meter currently.  It has the priciest water in China, more than 30 times the RMB 0.12 it charged in 1991.

Nanchang’s municipality, which gave Asia Environment its first contract for a BOT wastewater treatment plant, announced in mid-July this year its intention to more than double current water tariffs.  Its tariffs for treatment of municipal wastewater are set to hike 163% to RMB 0.58 per cubic meter, up from RMB 0.22.

“We are the market leader among local players and have a good track record,” says Wang.  International players like Veolia and Suez tender at higher bids.

We have 860 guests and no members online